Check Out The Homes And Cars Owned By These Famous Celebrities

The entertainment industry has introduced us to plenty of star-studded figures since its inception. Some have since been known for the songs they made, while others garnered worldwide acclaim for their acting credits both in films and TV shows. Sometimes, they would even dabble in more than just one line of work. Well, one thing’s for sure: at the end of the day, these stars are just as wealthy as they are famous.

As a reward for the achievements they’ve made, it’s no surprise they also gift themselves a couple of fancy things from time to time. While it could be a variety of items, one of the more common rewards would arguably be cars. Now that we’re on the topic of expensive purchases, we might as well take a look at the houses they bought along the way, too. Now then, without further ado, let’s take a look at these four-wheeled wonders and lavish mansions, shall we? Starting off this list, we have the eldest of David and Victoria Beckham’s kids, Brooklyn Beckham. 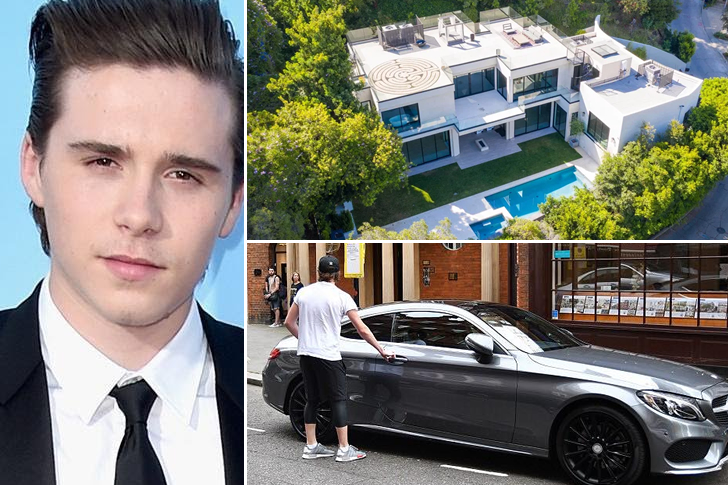 With his dad being the famous footballer David Beckham and his mom the Spice Girls singer-turned-fashion-designer Victoria Beckham, it’s safe to say Brooklyn Beckham now has plenty of money. Not just from his parents, though, but also from his career both as a photographer and model.

Around 2018, Beckham was spotted cruising the streets in his MG Convertible. The car alone is already quite a treasure to own, but that isn’t the only four-wheeled wonder in his collection. He has a Jeep, a Land Rover, and two Mercedes-Benzes, one of which is the GL 63 AMG that he bought for around $140,779. Besides these, the model/photographer also recently spent some investment money on a Beverly Hills mansion worth $10.5 million. Along with its gorgeous modern aesthetic, the property has plenty of amenities to keep Beckham and his soon-to-be wife Nicola Peltz entertained. This includes a yoga and gym room, a healing room, and a saltwater pool.